TinyTouchLight is a dimmable USB night light with capacitive touch control based on the ATtiny13A. It plugs into any USB charger or power bank. 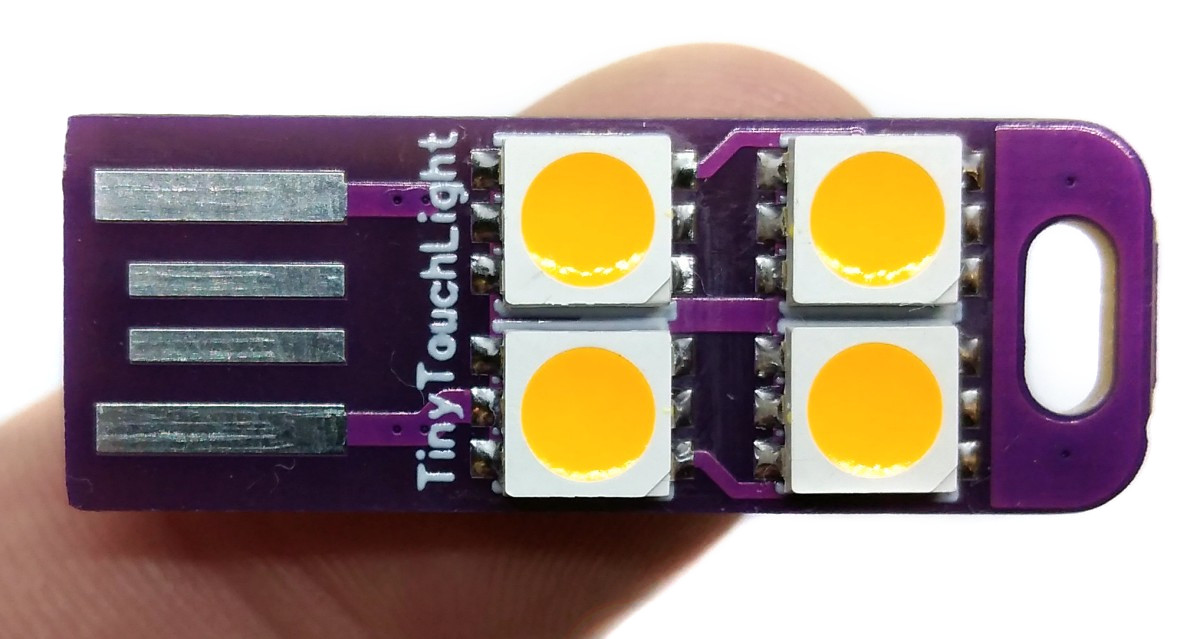 This implementation of a touch-sensitive button (touchkey) is based on the charge sharing approach similar to Atmel's QTouchADC and Tim's TinyTouchLib. It works without external components, only a resistor for noise reduction is used, which can also be dispensed with. The touchkey itself is a small copper area on the PCB (sense electrode), which is covered with solder mask. This sense electrode is connected to a single ADC-capable pin of the ATtiny via the resistor.

The touch sense pin (here PB4) is connected through series resistor RS to the sensor electrode capacitance, represented by Cx. The switch SW represents a finger touching the key. The capacitance introduced by the finger is represented as Ct. When the key is touched, Ct is switched into the circuit forming a parallel capacitor with Cx, changing the effective sensor capacitance to Cx + Ct.

The series resistor RS is nominally 1kΩ, but it may be increased to higher values to improve the noise immunity of the circuit. The value of RS should be increased in steps to find the lowest value that provides adequate noise immunity. Resistance values of up to 100kΩ have proven to be useful in extremely noisy environments. For this application a 47kΩ resistor was chosen.

The value of Cx should be close to that of the ADC’s internal sample-and-hold capacitor CS/H (~14pF). For best performance it is recommended that Cx+t should not be greater than ~60pF. If the sensor electrode is designed as a copper surface on the PCB, then it should be roughly as large as the contact surface of a finger (8-15 mm in diameter if the touchkey sensor is round, or with a 8-15 mm side if the touchkey sensor is square). There shouldn't be any traces on the other side of the PCB. The back side can have a ground plane, but this should not be a solid fill.

The acquisition method works by sharing charge between the ADC’s internal sample-and-hold capacitor (CS/H) and the sense electrode capacitance (Cx). When the sensor is touched the effective capacitance of the sensor electrode increases and becomes Cx + Ct. This affects the amount of charge shared between the capacitors. When pre-charging Cx and sharing with CS/H, charge transferred to CS/H increases on touch and ADC input voltage increases. When pre-charging CS/H and sharing with Cx, charge remaining on CS/H decreases on touch and ADC input voltage decreases. But the resulting signal from the averaged ADC values increases on touch. If the difference between signal and reference is greater than the user-determined threshold (delta), a touch is reported.

The charge sharing is carried out in the following sequence:

Step 2: Connect touchkey and S/H cap in parallel. Read the voltage via the ADC.

By setting the touch sense pin (PB4) to INPUT (no pullup) and setting the ADC muxer to this pin, charge is flowing between the capacitors until the charge is distributed proportionally between them - the charge is shared. The voltage across CS/H, due to the remaining charge, is sampled by the ADC.

Step 4: Connect touchkey and S/H cap in parallel. Read the voltage via the ADC.

Step 5: Calculate the voltage difference and compare it with the user-determined threshold.

The LEDs are controlled via a PWM-capable pin (PB0) and a MOSFET. Timer0 generates the PWM signal, the duty cycle is controlled via the OCR0A register. The main function brings everything together: